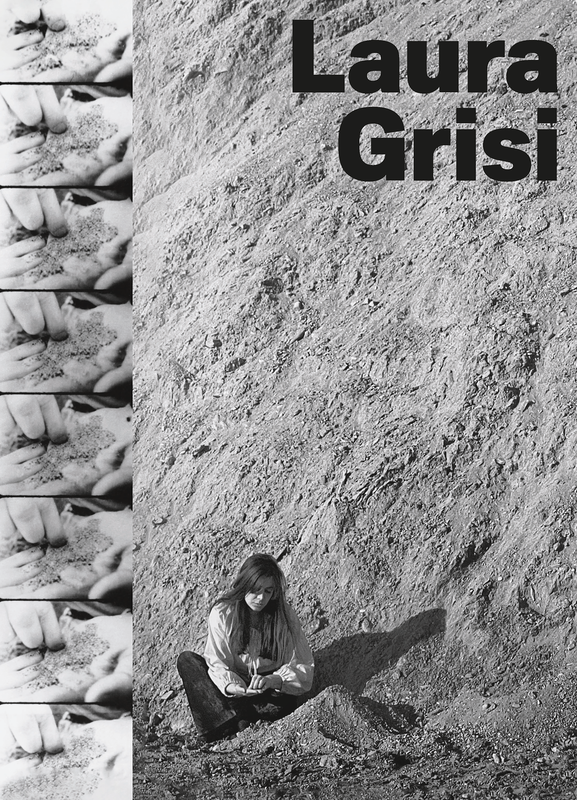 Laura Grisi. The Measuring of Time
Author(s)
Germano Celant, Krzysztof Kościuczuk, Laura Grisi, Marco Scotini, Martin Herbert, Valérie Da Costa
Publisher
JRP Editions, Muzeum Susch
Binding
hardcover
Size
17 x 24 cm
Pages No.
272
Language(s)
English
ISBN/ ISSN
978-3-03764-566-6
Year
2021
Price (EUR)
35,00
Description
Published on the occasion of her long-deserved retrospective organized by Muzeum Susch from June to December 2021, this book testifies to the singularity and innovative vision of Italian artist Laura Grisi within contemporary art history. Although her work has mostly been “reduced” to Italian Pop art—if not entirely overlooked—from the outset Grisi worked beyond that category, pertinently intercepting various lines of international artistic research (Conceptual art, Optical art and Kinetic-Programmed art, Minimal art) and applying them in her own original synthesis. Within an activity whose fundamental motif is the “journey”—from remote locations visited and documented, to the multiplicity of mediums used—Grisi embodies a stateless and nomadic female subject who defies the politics of identity, the univocity of representation, and the unidirectionality of time.

Born in Rhodes, Greece, in 1939, educated in Paris, and living between New York and Rome where she died in 2017, Grisi spent long periods of her life in Africa, South America, and Polynesia. This involvement with cultures beyond those of the Western world was destined to indelibly mark her own experiences in the search for a cosmic thinking or “science of the concrete” (Levi-Strauss). Despite making photography the original method of her research in the early 1960s, she subsequently moved to “Variable Paintings” in the mid-1960s (with sliding panels and neon tubes). By the end of the 1960s she was creating dynamic, environmental installations in which she artificially reproduced natural phenomena such as fog, wind, and rain, before ultimately arriving at a descriptive, verbal form and mathematical language as a conceptual tool in the 1970s and 1980s, in order to explore the mechanics of human perception and knowledge. Grisi’s entire body of work strives to take into account the breadth, multiplicity, imperceptibility, and infinite proliferation of all that is possible, but starts out from precise constraints, from paradoxical gaps, from linguistic and semiotic limitations, in accordance with an approach that is close to the Nouveau Roman, to Nouvelle Vague cinema, and the French Oulipo group.

During her lifetime, Laura Grisi exhibited at the Galleria dell’Ariete, Milan, in 1965; Leo Castelli Gallery, New York, from 1973; the Van Abbemuseum Museum, Eindhoven, in 1976; and Konrad Fischer Gallery, Düsseldorf, from 1978. Her work was included in 1966 at the XXXIII Biennale di Venezia and the group exhibition Italy New Tendencies at Gallerie Bonino, New York; in 1968 in Young Italians at the ICA, Boston, and the Jewish Musem, New York, and Teatro delle Mostre at Galleria La Tartaruga, Rome.

Published with Muzeum Susch on the occasion of the retrospective exhibition The Measuring of Time, curated by Marco Scotini, June–December 2021

The magazine MS# offers a more detailed view of what Muzeum Susch and Art Stations Foundation CH have to offer. This publication brings together carefully selected contributions, which highlight and further develop in written form the different aspects of our activities.

From the parallel lives, which exhibitions can live when mediated in print, to contributions made by our cherished artists who worked here in the residency programme, to a different presence of performance. 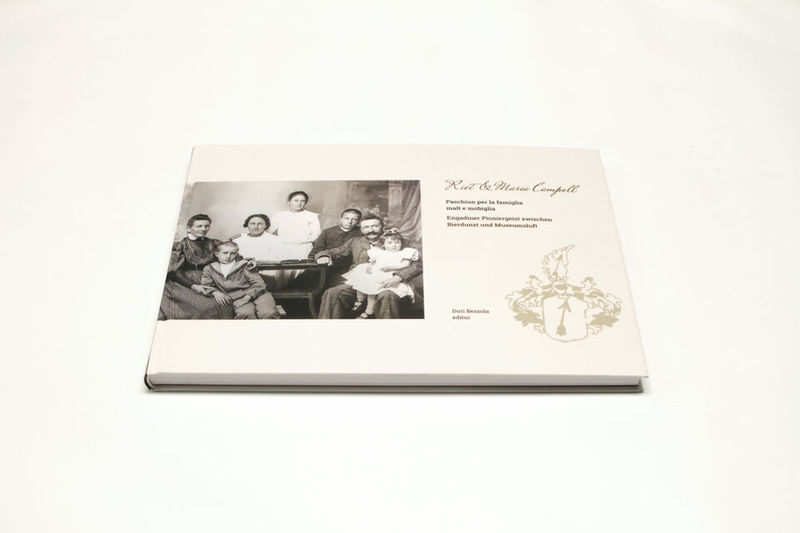 Riet & Maria Campell
Author(s)
edited by Duri Bezzola
Publisher
Duri Bezzola
Binding
hardcover
Size
29,8 x 21,3 x 1,4 cm
Pages No.
162
Language(s)
Romansh, German
ISBN/ ISSN
978-3-9525338-2-6
Year
2021
Price (EUR)
41
Description
"Live as you will wish you had lived when you die". Riet Campell (1866-1951) tells us episodes from his eventful life, of his youth in Susch, of his training as a beer brewer in Munich, of his work in the famous brewery in Susch - in today's Muzeum. In 1892 he expanded into the Upper Engadine and built a second flourishing brewery in Celerina. As a pioneer, he collected many objects of home culture, he even bought up entire historic parlours and then founded the Muse-um Engiadinais in St. Moritz in 1906. In his family and that of his wife Maria (1871-1929), a deep attachment to the valley went hand in hand with cosmopolitanism and great social elasticity.

For the first time, the autobiography of this 1939 pioneer is published in Rhaeto-Romanic (original) and German (translation 2020), supplemented by some reminiscences of his wife. Attached explanations and notes by the editor, as well as illustrations and enclosed essays, provide insight into an eventful era and place the events of the time in their landscape, historical, social and family context.
From Poland with Love. Letters to Harald Szeemann
Author(s)
Anda Rottenberg
Publisher
Scheidegger and Spiess, In collaboration with Muzeum Susch / Art Stations Foundation CH
Binding
hard
Size
17 x 24 x 1,8 cm
Pages No.
200
Language(s)
English
ISBN/ ISSN
978-38-588184-2-3
Year
2019
Price (EUR)
32,00
Description
Over twelve months, between May 2017 and May 2018, Polish curator and critic Anda Rottenberg wrote a series of fictional letters to the legendary curator and writer Harald Szeemann (1933–2005). In them, she reflects on the art and nature of curation throughout art history. Questioning the position of female artists in both Eastern and Western Europe, Rottenberg encourages new individual readings of them. Her letters display distinctive rhetoric that raises questions and challenges judgments to amalgamate individual opinion and objective knowledge into a personal history. 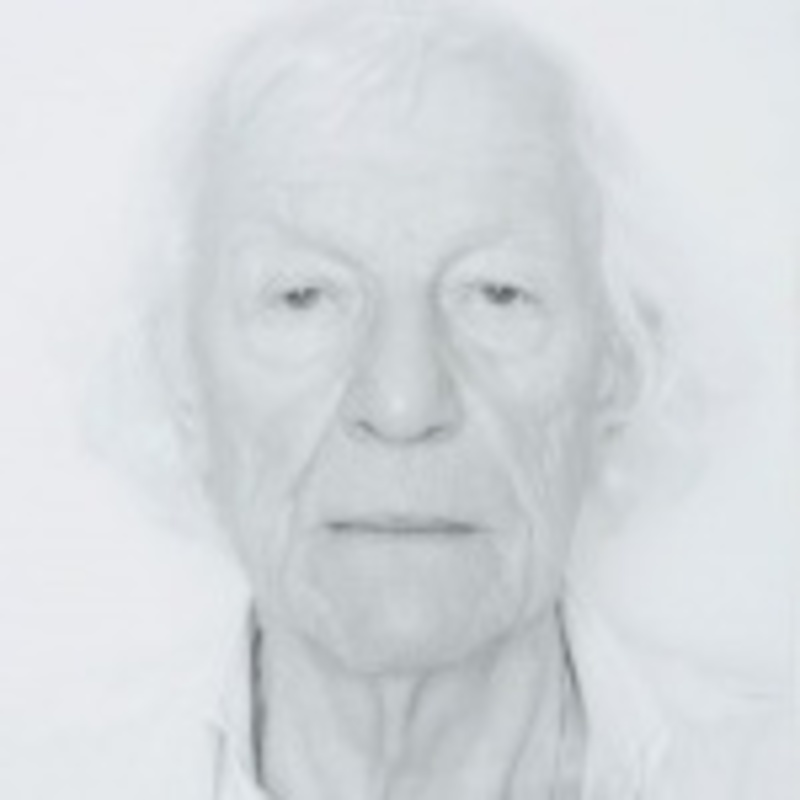 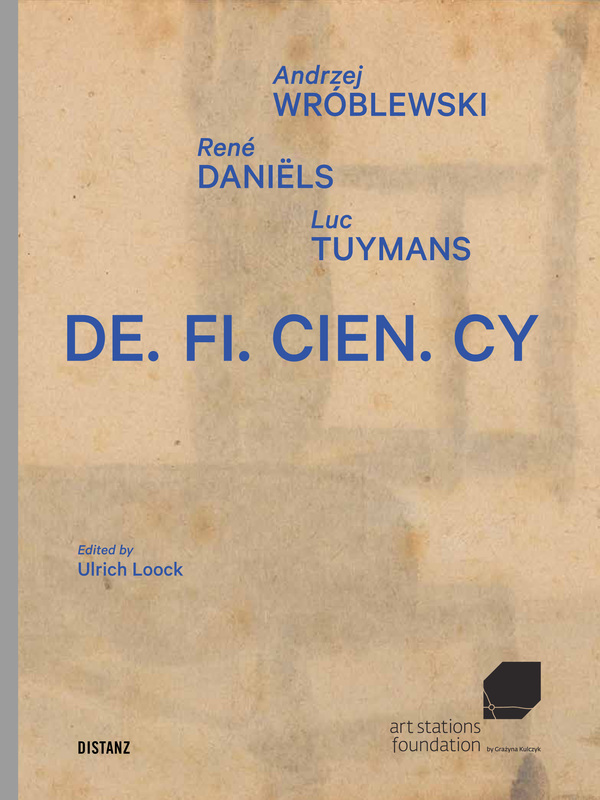 Anrzej Wróblewski, René Daniëls, Luc Tuymans, DE.FI.CIEN.CY
Author(s)
Ulrich Loock
Publisher
Distanz Publishing, Art Stations Foundation
Binding
hard
Size
20,3 x 26,4 x 2,3 cm
Pages No.
216
Language(s)
English
ISBN/ ISSN
978-39-547612-1-0
Year
2015
Price (EUR)
22,00
Description
“DE.FI.CIEN.CY”, edited by the acclaimed curator Ulrich Loock, accompanied the exhibition by the same title that took place in Art Stations Foundation in Poznań in 2015. This groundbreaking show presented drawings, gouaches and watercolours by a trio of internationally respected painters. René Daniëls, Luc Tuymans and Andrzej Wróblewski, departing from their individual historical, geographical and ideological contexts, all investigated the limits of the visual representation and experimented with the pictorial potential of abstract imagery. In addition to numerous color reproductions of the exhibited works, the book contains an insightful interview with Luc Tuymans conducted by the renowned Polish art historian Anda Rottenberg and an essay by Loock, disclosing his thoughts behind the exhibition’s concept and his reasons for juxtaposing these very distinct creative practices. The readers themselves, following the clues provided by the curator, can observe the formal contrasts between the works and detect the themes that all three artists shared interest in. 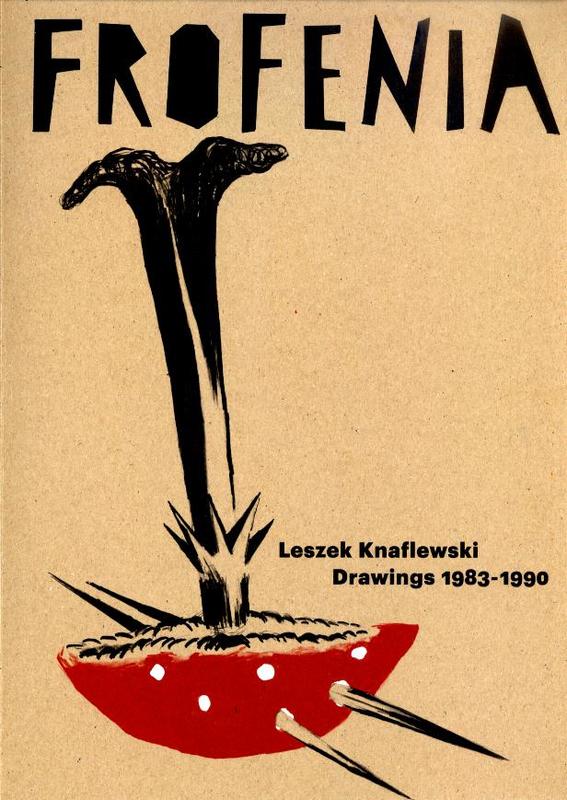 Frofenia. Leszek Knaflewski. Drawings 1983-1990
Author(s)
Leszek Knaflewski, Waldemar Baraniewski, Michał Woliński, Honza Zamojski
Publisher
Mundin
Binding
hard, in grey case, limited version signed by artist
Size
22 x 30 x 2 cm
Pages No.
191
Language(s)
English
ISBN/ ISSN
978-83-64353-02-4
Year
2013
Price (EUR)
33,00
Description
Leszek Knaflewski (1960 – 2014) remains one of Poland’s most interesting and influential artistic personas. His works do not tell simple stories, nor they are easy subjects of interpretation – instead, they succeed in generating a vast array of associations, stir the viewers’ imagination and tend to stay in the one’s memory. “Frofenia” presents an impressive collection of 77 Knaflewski’s monochrome drawings, conceived during the country’s occupation by the Soviets. The tome draws its title from the artist’s own, imaginary vocabulary, referring to a sphere in both language and visuality, where everything is possible and no rules apply. The book is inhabited by curious black-and-white human-animal hybrids, nightmarish landscapes and disturbing examples of fauna and flora, all portrayed in an expressive and energetic style. Knaflewski’s bestiary ought to be looked at as a set of ambiguous metaphors – the artist allows the readers to look behind the Iron Curtain and experience the tragic aura of one of Poland’s darkest chapters. 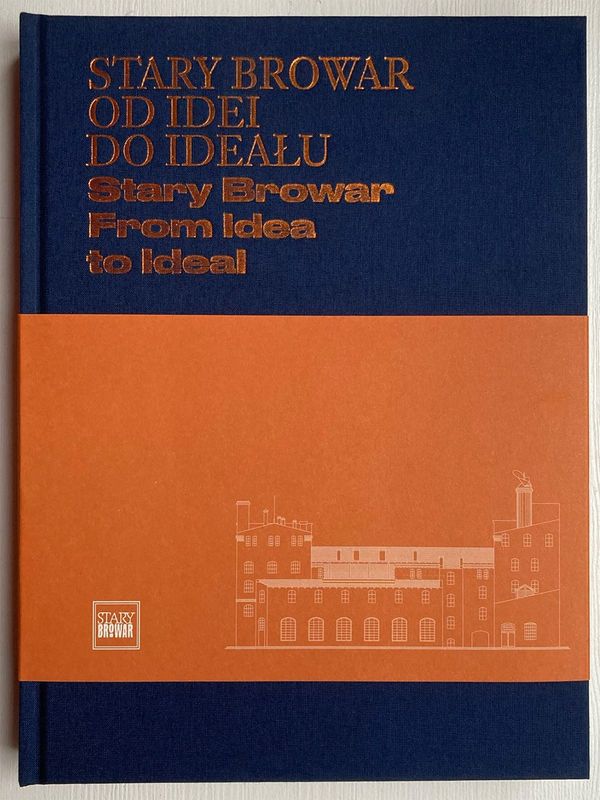 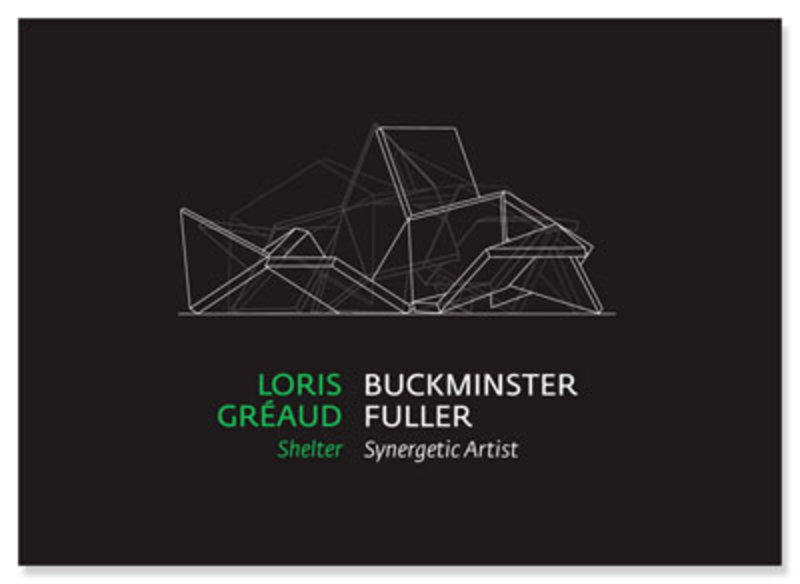 Buckminster Fuller Synergetic Artist, Loris Gréaud Shelter
catalogue to the exhibition
Author(s)
Publisher
Art Stations Foundation
Binding
soft
Size
21 x 14,9 x 0,5 cm
Pages No.
49
Language(s)
English, Polish
ISBN/ ISSN
978-83-927804-0-3
Year
2010
Price (EUR)
15,00
Description
Catalogue to the exhibition in Stary Browar in Poznan from 2010. Combining the exhibition of installations and video works by French artist Loris Greaud (born 1979) with the presentation of inventions by American scientist R. Buckminster Fuller (1895‐1983), we are coming up with a truly multifaceted project. This is another of our paired individual exhibitions, where juxtaposing the artists of different generations allows us to look at a given problem from a broader perspective and interpret it to form different angles. 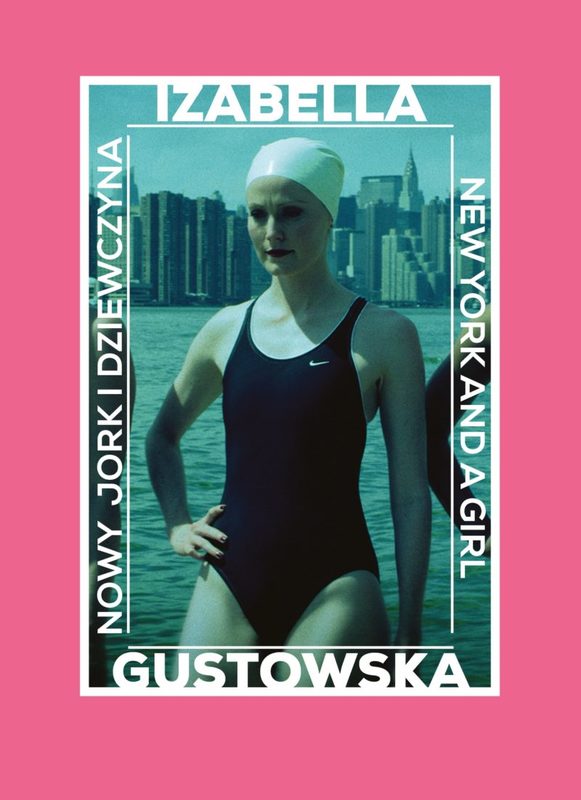 Grażyna Kulczyk sets great store by her role as an ambassador for contemporary Polish and Middle Eastern European art, which has long been omitted from the canon and tended to be overlooked by the majority of Western critics and collectors, due to the particular political environment of the former Eastern bloc states. Beyond this general ambition, her collecting strategy also reflects two key interests: International artists have joined the collection, opening up new perspectives and highlighting contrasts between works but also hinting to parallels and raising questions about the multifarious and complex relations between East and West in general. These expanded perspectives and contrasts within the collection provide the basis for commentary on complex and timely global concerns. The women’s perspective in the collection adds a clear feminist mission to the endeavours of Grażyna Kulczyk, whose own history as an independent, creative entrepreneur is at the root of a deep understanding and emotional connection to issues women face in their artistic practice. Her collection reflects this interest, inviting and encouraging participation, contributing to the recognition and greater visibility of women — as artists and elsewhere.